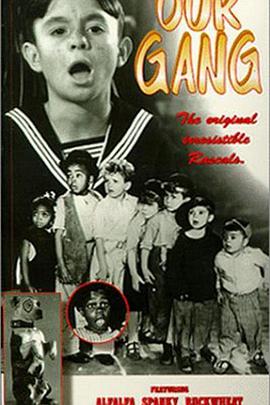 在这部小捣蛋短片/喜剧/家庭片中,The first episodes were shot in 1922 and found an end in 1944. Totally there are 221 single episodes. A complete catalog of all episodes you will find at "All movies of Our Gang / The Little Rascals at a glance". A small picture gallery you can find under "Gallery". The little Rascals were called into live through the legendary producer Hal Roach (Roach also spotted the comedians Laurel & Hardy). The trigger for the combination of a child troupe was the exceptional big success of rascal Ernie "Sunshine Sammy" Morrison in comedies of Harold Lloyd and Snub Pollard. The composition of the troupe was checkered and represented typical children in the neighborhood. The original cast were Mary Kornman (the beautiful girl), Allen "Farina" Hoskins" (the naive negro), Mickey Daniels (the freckled whipper-snapper), Joe Cobb (the pleasant fat person), Jackie Condon (the rich fellow), Ernie Morrison (the rascal) and last but not least Pete the pet with a painted circle around his right eye. The success of the rascals was based on the imitation of the world of the adult but at the same time they played a trick or shew a behavior which the adults wouldn't dare to do themselves. It is also astonishing that the children acted extremely natural in contrast to the child stars in the 30's with their pseudo adultness. The stories were made from simple pattern but affectionate. At this time didn't exist real scripts but rather there was a short outline of the main theme, gags and other ideas were developed only during the shot. The success of the serial wasn't due to a single person but was the result of a exemplary teamwork. Each episode offered new adventures for the children. There is a trip to New York where happened the coincidence that the children are able to nabbing a bus, to play deadhead or to hover over the city with a piece of fabric as parachute replacement. In spite of their unusual behavior, the rascals never had to expect serious consequences because they tricked the adults with wit and phantasie. Perhaps the children took a sound thrashing after a successful adventure, but after that they show to the audience with a roguish expression that the preceded adventure was worth for this and that nothing could take away their go by experiences. When Hal Roach sold the serial to M-G-M in 1938, it rang in the decline of the serial. M-G-M wasn't able to maintaining the magic which the serial radiated before and was shut down in 1944. Since then the serial experienced a resurrection time and again through broadcastings on TV. With this they erected a lasting monument to the little rascals.

One member of the gang has a widowed mother who keeps the village store. A rival merchant opens a shop across the street and by questionable methods lures the widow's customers away from her. The gang decides to take a hand and try and get the widow's business back.